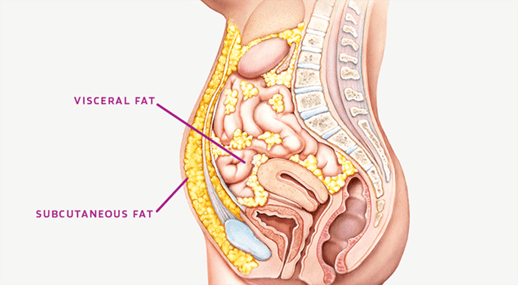 How to Get Rid of Belly Fat

Getting rid of belly fat is a common goal today. After all, who wouldn’t want to have a flat stomach and possibly six-pack abs?

The problem is, there is so much contradicting information on the topic, so picking out the useful bits can be near impossible.

To that end, we’ve put together this post outlining belly fat, what it is, and how to go about losing it.

What Is Belly Fat, Anyway (And The Truth About It)?

If you’ve spent any time looking at fitness and weight loss information, you’ve probably come across plenty of products and informational pieces claiming they have the answer to eradicating belly fat. For example, you might have come across diets or special exercises that seemingly target our belly fat.

Sadly, it doesn’t work that way. Though it would be amazing to target belly fat directly, the body doesn’t always do what we want it to. Specifically, we can’t spot-reduce body fat (3). It simply isn’t possible. To shed belly fat, you need to reduce your calorie intake, which will force your body to burn fat from all over.

How to Get Rid of Belly Fat In Three Simple Steps

At its core, weight loss occurs from placing yourself in a calorie deficit (4). By consuming fewer calories than you burn, your body has no choice but to begin burning fat (including the visceral fat) and lean tissue to get the remaining energy it needs. And thus, you lose weight and become thinner.

According to research, we should be in a deficit of no more than 500 to 600 calories per day. On average, this would allow us to burn roughly one pound of fat per week (5).

2. Do some weight training

Weight training is incredibly beneficial for everyone who can do it safely, and those benefits are only amplified when dieting to lose fat.

Weight training provides a solid stimulus for our muscles, which essentially signals the body, “Hey! We need our muscle mass for physical activity. Don’t burn it off for energy!”

As a result, you more easily maintain your muscle, lose primarily fat, and achieve your goals more quickly (6).

One interesting study from 2010 came to an interesting conclusion (7). But first, a few words about its design first. The study had ten healthy but overweight subjects. Researchers had the participants go through two conditions that were spaced out by at least three months.

In the first condition, subjects had to diet for two weeks could spend 8.5 hours in bed per night. On average, they slept for 7 hours and 25 minutes.

In the second condition, subjects had to diet in the same way for two weeks but were now allowed only 5.5 hours in bed each night. On average, they slept for 5 hours and 14 minutes.

Subjects lost 6.6 pounds (3 kilograms) in both conditions. Half the weight loss came from fat, and half came from lean tissue when they got to sleep for 8.5 hours per night. Not great, but not terrible.

In contrast, when subjects could only spend 5.5 hours in bed per night, only 20 percent of the weight loss came from fat, with the remaining coming from lean tissue.

With everything else the same, this one thing led to considerable differences in results.

Though the study had its limitations, it showcased the huge importance of good sleep for optimal fat loss. So, always make sure to sleep for at least seven hours per night.